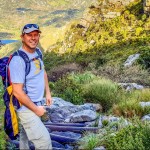 Due to the underlying geology the area surrounding Punda Maria is well known for sightings of larger herds of buffalo and elephant and rarer antelope, plant and bird species

Punda Maria is very different from other camps in the Kruger by looks and surroundings. The area to the east has the only large Mopane trees, whereas they are stunted further south. Flowers are more abundant here in the sandveld(based on sandy soils), than anywhere else in the park. Archaeological sites in the area are well preserved and worth a visit. The far north of the park was well known, for ivory poachers and even diamond prospectors around the 1900’s, which led to the appointment of Capt. JJ Coetser as the first ranger in the north around 1919. The camp is named after his wife Maria. A story was told about the camp meaning ‘punda milia’ as striped donkey in swahili, but this language is not spoken around here.

Due to the underlying geology and location north of the tropic of Capricorn, the area surrounding Punda Maria the area is well known for sightings of larger herds of buffalo and elephant and rarer antelope species, including Eland, Lichtenstein’s Hartebeest, Nyala, Roan, Sharpe’s grysbok, Suni and Tsessebe. Tree species in this area of the park are also very different to elsewhere in the park and support a host of birds not found elsewhere in Kruger either. The camp itself still has some of the original bungalows available for accommodation, as opposed to most of the other camps, that have rebuilt.

A base camp for seekers of historical adventure trails and stories of adventure and survival against all odds. Birders will find many unique bird species and botanists will find many beautiful flowering plants and trees not found in these numbers or size elsewhere.
Great game viewing especially close to water and the route to Pafuri.
The waterhole on the camp edge can offer some good intimate game viewing.
Swimming pool for residents will entertain the kids on hot summer days.

Animals to look out for in the area:

Birds to look out for in the area:

Not to miss routes in the area:

The waterhole, on the perimeter of the Punda Maria camp
Springs: Thulamila and the springs on the S99 and S58
Waterholes: Klopperforntein dam and the riverine drive on the S61
Luvuvhu Close to the Pafuri Border post along the S63

Jacques has been a keen travel junkie, for as long as he can remember. Having spent his childhood in Namibia, Limpopo province in South Africa (near the Kruger National Park ) and KZN in South Africa and later Cape Town, always been surrounded by nature and beautiful scenery. Qualifying as a safari guide in 1996, Jacques guided over virtually all possible natural eco systems and travelled over hundreds of thousands of kilometers, through all the southern African countries. Later he spent 8 years living and working in Austria, mixing cultural, city and natural scenic travels all across Europe.

This site uses Akismet to reduce spam. Learn how your comment data is processed.

Tulbagh – the “Valley of Abundance”
8 months ago

Created by Jacques Fouche · A man powered by Adventure and the love of Life!
Copyright 2021 · All rights reserved